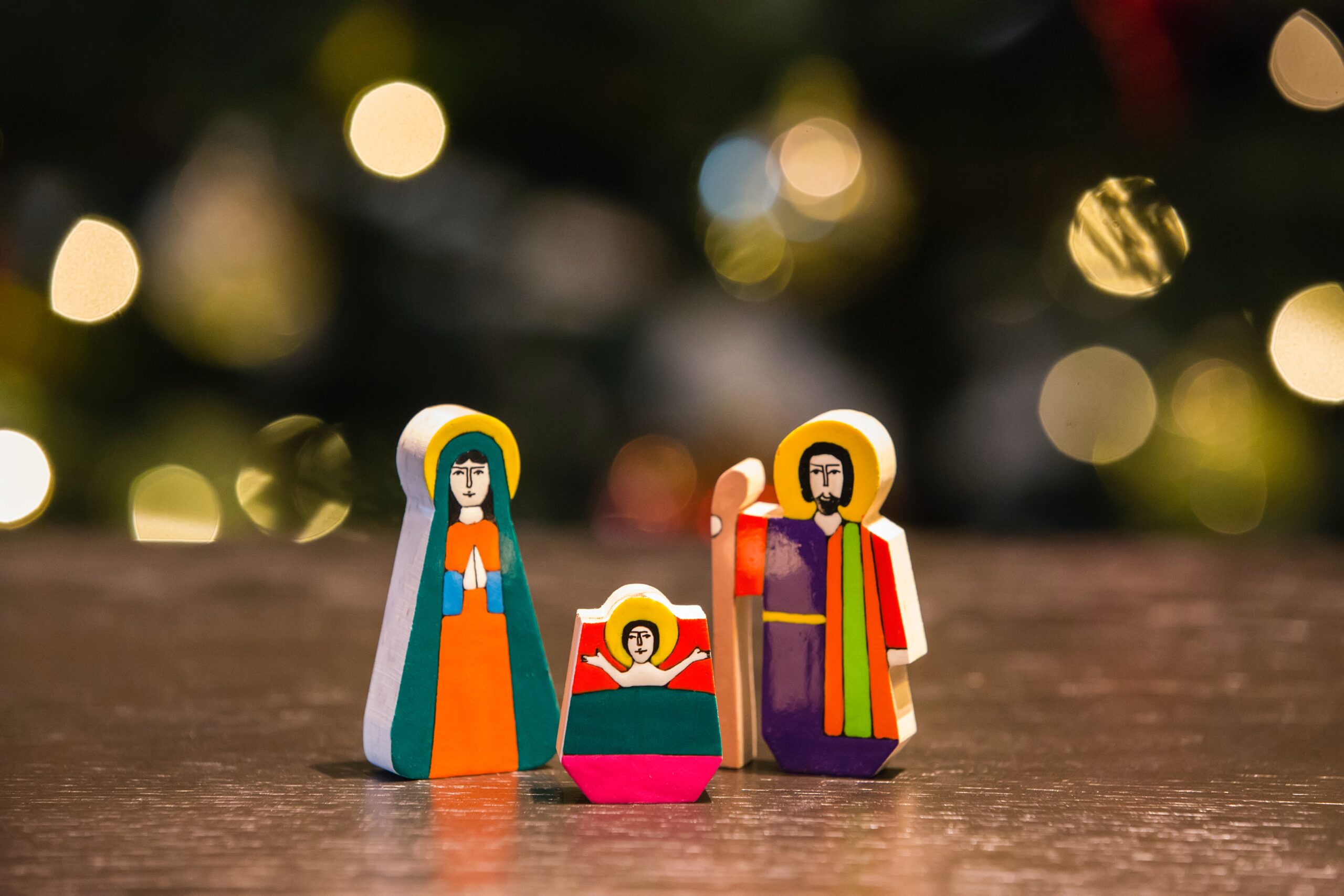 Even in a normal December, it’s hard to get through the month without encountering a Nativity play crisis. In 2021, it’s Covid that’s leading to cancellations; in earlier years, columnists habitually cited multiculturalism as the motive for modifying or abandoning the original story.

In one sense, anger is understandable – parents, we’re told, want to see their offspring perform in person (full disclosure – I’m very happy to watch mine via video-link, since that minimises the chances of being stepped on by someone trying to find the perfect angle for a photograph of their angel). In another – what on earth is wrong with changing the story? Why does it matter if Elvis sings ‘Blue Christmas’, instead of ‘Away in a Manger’? It’s not like there’s a canonical script, after all.

The earliest nativities, probably performed as part of the mystery plays of medieval Europe, often involved a fairly free interpretation of the (often inconsistent) gospel narratives – sometimes not treating them entirely seriously. The Secunda Pastorum, or ‘Second Shepherds’ Play’ of the Wakefield Cycle, for example, features a thief stealing a sheep, hiding it in a cradle and demanding gifts from the hapless shepherds for the faux-baby. It’s only after these heavily burlesqued scenes that the shepherds proceed to Bethlehem to find an actual new-born in a manger. 20th century Nativities often took an explicitly political slant. Jean-Paul Sartre’s Bariona ou le fils du tonerre, for example, linked the Roman Empire with the Nazi occupation of France. During the General Strike of 1926, the composer Rutland Boughton enraged the Daily Mail when his nativity, Bethlehem (itself based on the Coventry Mystery Play) featured Herod as a top-hatted capitalist and showed Jesus being born in a miner’s cottage. 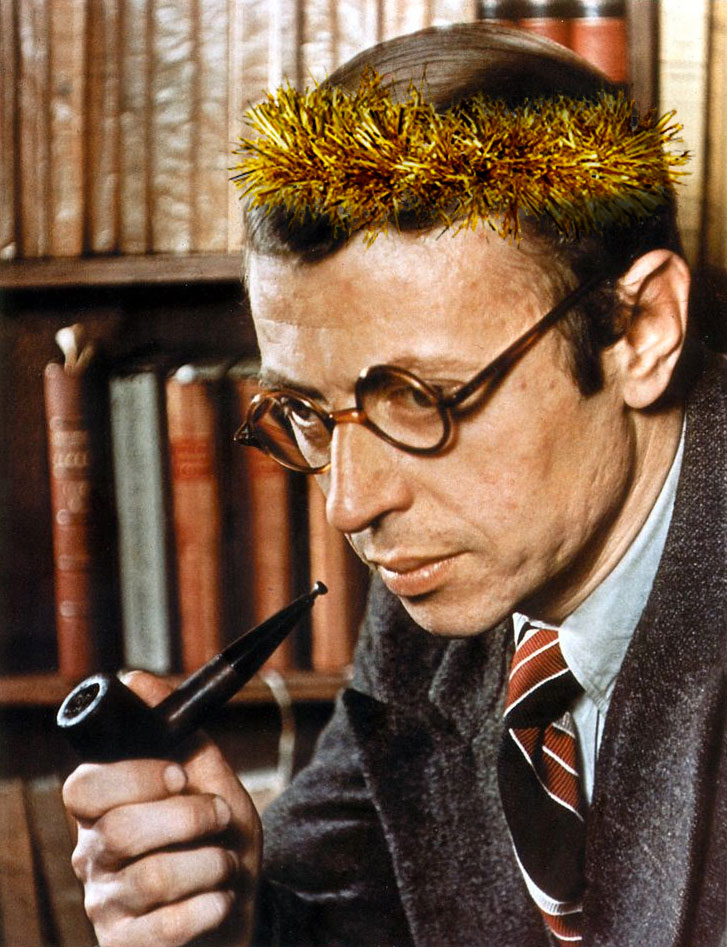 Telling the Christmas story (homeless migrants seeking sanctuary) always carries within it the capacity to criticise the powerful. In this sense, the (sometimes manufactured) outrage of present-day tabloids shouldn’t be surprising. What is surprising, though, is that while scores of artists, composers and poets have reflected explicitly on the various Nativity narratives in their work, prose writers have been significantly less keen – once you get beyond Monty Python, Ben Hur, Nativity! or Charlie Brown’s Christmas, there are relatively few films or novels that deal either with the Nativity or with nativity plays.

I’d like to think about this in the context of two novels – Dark Eden, a 2012 science fiction story written by Chris Beckett, and End of Term, a children’s book published in 1959 by Antonia Forest. 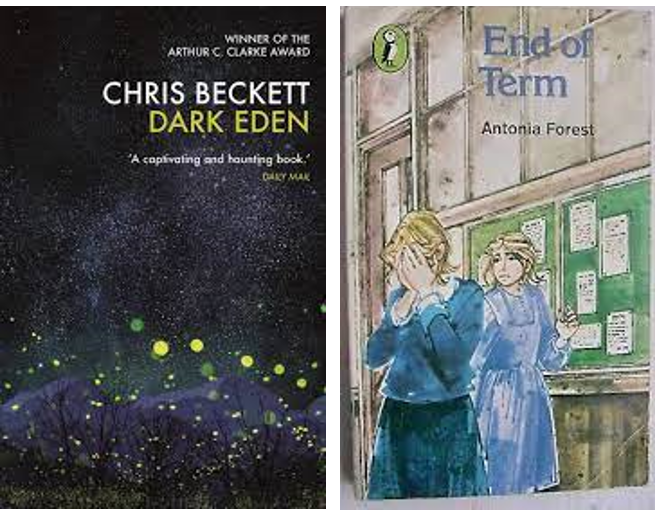 The 500-odd members of Dark Eden’s human population descend from a couple who were shipwrecked on the planet around a century-and-a-half ago. Every year, this Family hold an Any Virsry, the climax (apotheosis?) of which is the retelling of their origin story. In a performance that is part mystery play, part pantomime, the Family repeatedly re-familiarise themselves with Earth far away in Heaven – full of Police Veekles, Kee Boards, RayedYo and LeckyTrickity, as well as stories about Jesus Juice (Jesus and the Jews) – as Angela and Tommy’s departure from Earth and arrival on Eden is re-enacted by members of the community. Beckett’s theologically informed SF is a deliberate effort to explore theo-genesis: history becomes legend, legend becomes myth, myth becomes ritual and ritual becomes orthodoxy. The key point here is that in order to retain humanity, people need stories to make sense of the world around them and relationships within them: things don’t have to be true, but they do need to be believed.

Forest’s novel is set in a boarding school on England’s south coast, where the annual performance of the Christmas Play is an opportunity to reward virtue (‘good character’ – good part: ‘dubious character’ – chorus). For the headmistress, the show is ‘our Christmas offering’: for the students, bored or terrified of being thought ‘priggish’, it’s a chore, or a chance to show off. Miranda, one of the few Jewish students, cannot understand why her classmates are ‘all so ruddy irreligious’ about the play: embarrassed and annoyed, they wonder if you have to – or ought to be – devout in order to participate in a Nativity. In response, Laurie, who is spoilt, selfish and almost wholly ignorant of even the most basic elements of the Christian story (she is convinced that Jesus was a shepherd, for example) is nonetheless absolutely clear about their role in performing the play. Their own religious feeling is irrelevant – their job is to make their audience believe in the lived reality of the story they are telling.

On the one hand, mystery plays reinforce a community’s sense of their shared past and create hope for their future. On the other, they evoke an awed awareness of divine immanence. How do either of these, then, relate to five year olds in tinsel wings?

First, what these examples emphasise is that the Nativity is what J L Austin has called a ‘speech act’: it is not a description or a recitation, but an action. It is an embodied performance that can only achieve its ends through physical enactment and tangible witness. This is the other side of the ‘precious memories’ that parents fear will be lost through YouTube video.

Second, Nativity ‘revisionism’ is inevitable. Every time we think about the past, we rewrite history as part of bringing a moral order to the present. If it takes a primary school decked out as aliens to bring us the Word, what does that matter so long as it is heard and felt?

The National Gallery, Nativity through Art

Born Divine: the birth of Jesus and other Sons of God, by Robert J Miller

‘Medieval mystery plays in the modern world: a question of relevance?‘, Margaret Rogerson The Yearbook of English Studies, vol 43, 343-66

SCIENCE AND RELIGION Superman’s Methodist Roots: What superheroes can tell us about the...

This article was originally published in the April 16th edition of the Methodist Recorder. Everyone knows that the Man of Steel arrived on Earth as a refugee from the doomed planet Krypton. Fewer people are...

Prof Tom McLeish shares a prayer he shared in Advent 2020 at the height of the coronavirus pandemic.

"The ECLAS team has produced four Collects for Advent 2020. The Rt Revd Dr Richard Cheetham, Bishop of Kingston and ECLAS Co-Director, has produced an Advent reflection for churches and individuals to use over the...