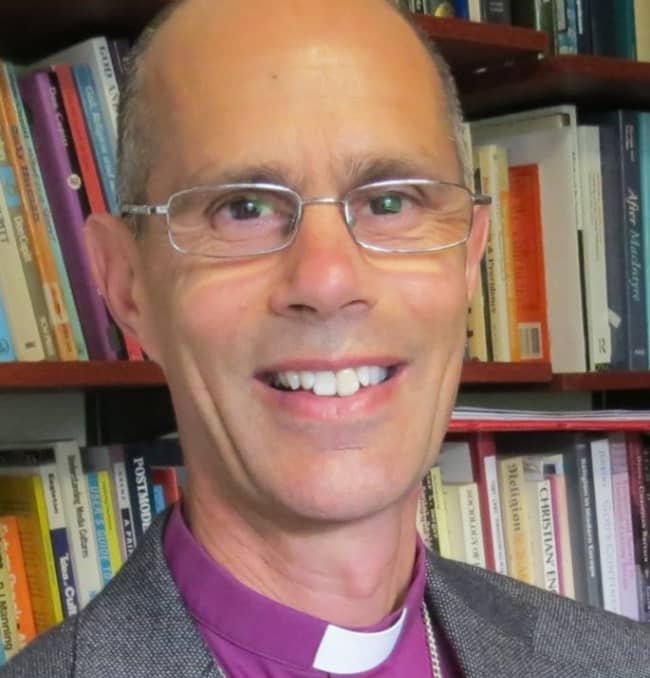 ECLAS co-director, the Rt Revd Dr Richard Cheetham, retires today after serving for 20 years as Bishop of Kingston in the diocese of Southwark.

Bishop Richard will continue his work with ECLAS as the project expands its work to equip senior Christian leaders to engage with science and theology. He will also continue as a member of the newly-established Anglican Communion Science Commission.

ECLAS Project Co-Director Revd Prof David Wilkinson said: “We give thanks to God for the long service of Bishop Richard as the Area Bishop of Kingston in the Diocese of Southwark and for his  wider spheres of ministry both nationally and internationally, and congratulate him on his well-earned retirement!

“We are delighted that Bishop Richard will continue to work with us as a co-director of the ECLAS project. Bishop Richard’s wealth of knowledge and experience in matters of science and faith have made an immense contribution to our work over the past nine years. He has been instrumental in establishing the project among Church of England bishops in particular, and we are grateful that he will continue to lend us his considerable expertise as the project expands.

“During Bishop Richard’s time with ECLAS he has reminded us of the importance of holding together academic scholarship with communication in the public square, in politics, media and in preaching. He continues to model a passion for science and a passion for theology, and the ability to speak about these big questions in a language that all can understand.”

Bishop Richard was born in Leicester, and then lived south of Manchester, but moved to Surbiton in 1966 aged 11 and attended Kingston Grammar School before reading physics and philosophy at the University of Oxford. After staying to take a PGCE, he taught physics at a large comprehensive school in North Yorkshire and at Eton College, and spent two years as an investment analyst in the City.

After ordination training at Ripon College, Cuddesdon, he was ordained deacon in 1987 and priest in 1988 and served his curacy in Newcastle. In 1990 he moved to the Diocese of St Albans as Vicar of St Augustine, Limbury, Luton. He became Area Dean of Luton in 1995 and in 1999 he was made Archdeacon of St Albans. During the 1990s he successfully undertook a part-time PhD at King’s College, London researching understandings of religious belief in public contexts via the lens of collective worship in schools.

Since coming to the Diocese of Southwark as Bishop of Kingston on 17 October 2002 he has been Chair of both the Southwark Diocesan Board of Education and of the Church of England’s Continuing Ministerial Development Panel. He led the Diocese’s work on the environment and on interfaith relations.

Bishop Richard is deeply interested in issues around truth and truth claims and, in particular, in developing better understandings in interfaith relations and of the relationship between science and religion. He has been Anglican President, and then Co-Chair, of the national Christian Muslim Forum, a member of the Foundation and Executive of St George’s College, Jerusalem (and Chair of its British Regional Committee), and a member of the Church of England’s Environment Working Group. He has been an Honorary Research Fellow at King’s College London since 2011 and Whitelands Professorial Fellow in Christian Theology and Contemporary Issues at the University of Roehampton since 2013.